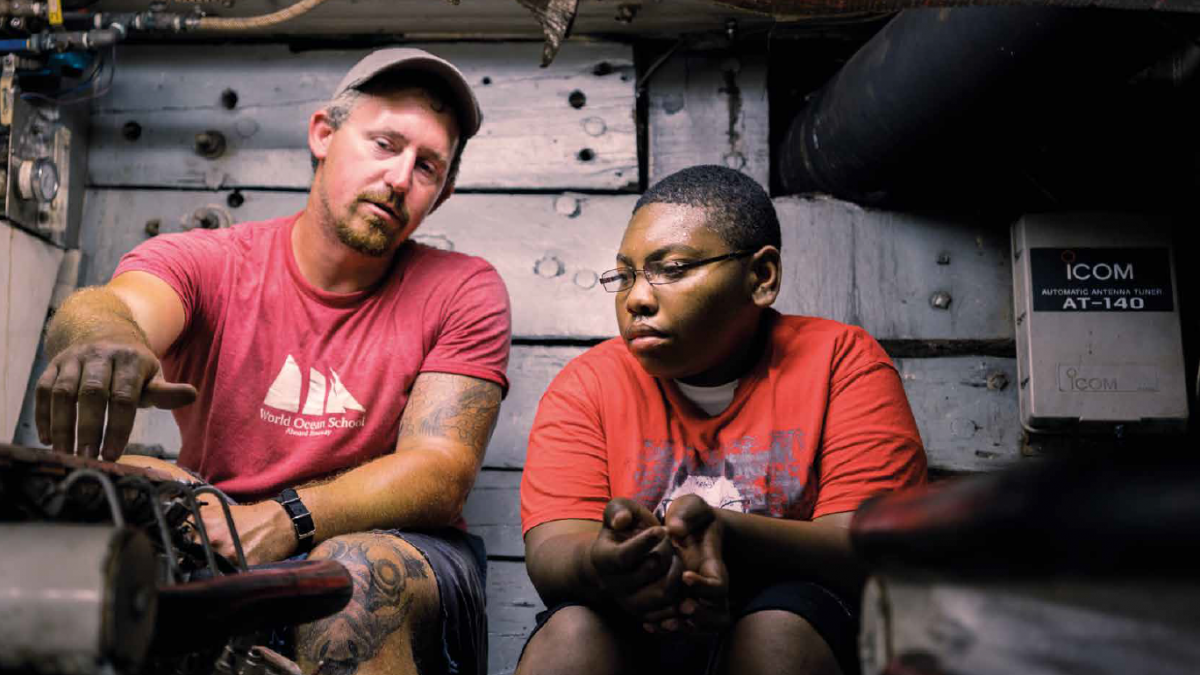 On board a historic sailing ship in the US, teenagers are getting back on the right tack.

Coiling a rope, steering the ship, setting sail or taking them in – that’s not usually part of the curricula of American high school kids. But this is exactly what teens learn on board the historic schooner Roseway, and of course much more. On the one hand, it is about living together and working on board, about teamwork and motivation; on the other hand, it’s also about specially developed learning programs on very different topics. For example, this summer, students sailed to Ellis Island, New York, to investigate the question »Why do people take great risks and make sacrifices to achieve freedom and new opportunities?« When your accommodation and classrooms are aboard a historic sailing ship, which you also have to actively sail yourself, part of the answer is quite intuitively a bit closer: after all, the crew of a sailing ship also take risks and experience inconvenience themselves. On Ellis Island, individual stories were investigated of various immigrants who had come here to the United States. Also, stories were heard and read about escaped slaves, who had come to New Bedford. And, again and again, the students learned on their own daily routine on board, that through challenges one can not only fail, but above all one can grow. This is the central concern of the »World Ocean School«, which operates the vessel and the many projects on board. The organization’s goals state: »The biggest challenge is to work against the apathy and inner retreat of the students. We motivate students with very different backgrounds by challenging them academically, physically and emotionally in our practical programs on board.«

The problem is actually quite large. In the US, according to the organization, three million young people drop out of school prematurely each year, and many more would retreat internally from society. But on board the Roseway this indifference is quickly replaced by inspiration, apathy by joy and boredom by motivation. Above all, self-doubt is transformed into confidence. »I actually steered this ship!« an 18-year-old says while standing at the dock with an admiring and loving look at the 260-ton sailing ship which was temporarily her home. »Somehow I still have not processed it completely!« But that’s the way it is. The students, who were afraid of loneliness, thrived in the friendly camaraderie between students and permanent crew. Others, who could not imagine being able to exist without the usual comfort of their parental homes, did not want to leave the ship at all after two weeks, that is how comfortable they felt on board. And those who were afraid of the challenges on board were especially proud when they were back down on deck after a trip into the masts or onto the bowsprit. In fact, the time on board the Roseway – students are on board for a few days or weeks depending on the program – has already had a positive impact on the lives of some, as Eden Leonard, executive director of the nonprofit organization, says: »There are in this regard many reports from parents or teachers. Often it’s just subtle changes when students say that they know the answers to tests because they’ve learned that on Roseway. Other students have also been involved in community aid projects, and many come back to us as volunteers. Some even went for nautical careers after finishing school. Particularly important are the cases in which the experience on Roseway has given the young people hope and inspiration to successfully finish their school. Research has shown that after their time aboard the Roseway, the youngsters have more optimism, drive and stamina.«

The »World Ocean School« was founded in 2002, but first the ship had to be restored. The Roseway is one of the last still sailing Grand Banks schooners, those legendary, fast schooners that were used for fishing off the coasts of Newfoundland. However, Roseway was designed as a »fishing yacht« and built in 1925 in Essex, Massachusetts. She was meant to not only fish, but also defend her honour in the races to and back from the fishing grounds and other regattas. Nevertheless, she also set a record when fishing in 1934 when she brought in 74 swordfish from the Atlantic in a single day. As a yacht, she was built and maintained to a high standard, which certainly helped in her still surviving till today. Each winter, she was hauled ashore and even the coal for heating was washed before being brought on board. Of course, such an extravagant treatment did not exist among the pure fishing schooners. In 1941, shortly before the Japanese attack on Pearl Harbor, the vessel was sold to the Boston pilotage. The pilots, it has been reported, were enthusiastic about the ship, its construction and sailing characteristics. During the war, all beacons along the coastline were extinguished and the pilots aboard the Roseway had to bring the ships through Boston’s minefields and submarine nets without any of these landmarks. After the war, the Coast Guard honoured the Roseway pilots with a brass plaque for their outstanding achievements. Overall, she remained in the service of the pilots for 32 years, until she was retired in 1973 and replaced by smaller motor boats. In that year, she was also rebuilt into a traditional sailing ship for passengers. First by a group of businessmen from Boston, but they sold her a year later to two enterprising captains. From 1975, Jim Sharp and Orvil Young sailed the charter ship, and Roseway even became a movie star (in the film version of Rudyard Kipling’s »Captain Courageous«). After that, however, it quickly went downhill, the two captains sold her and for a couple of years she worked in the tourism industry in Camden until she was confiscated by a bank in the 1990s.

In 2002, the bank donated the ship, which was by now quite run down, to the World Ocean School. For two years, they restored and refurbished her, and then the newly created sail training ship was able to make its maiden voyage to the Great Lakes, on the one hand to be thoroughly tested and, on the other hand, to promote the World Ocean School program. In May 2006, ship and school moved to Boston, where the programs were developed while Roseway was already used for day trips and charter cruises. The ship and school are financed by partner schools, which carry out programs tailored to their needs on board with their students, as well as donations by individuals and companies and day charter trips. Since the founding of the World Ocean School, more than 20,000 young people have participated, currently around 1,000 per year. Many come from Boston or even from the Caribbean island of St. Croix, the two »home ports« of the Roseway, but also from schools in other areas. »74 percent of the participants come from lowincome families,« adds Eden. »Either entire school classes are on board in the context of projects specially developed for them, or even individual young people aged 12 to 16 from all over the world as part of the Summer Ambassador Program, which are two-week trips each. The classes can span all ages, from 9 to 22 years.« At any rate, the enthusiasm seems to be age-spanning. Representing many, a 20-year-old student describes his impressions after a trip with the Roseway. His favourite job on board was to be helmsman. But most of all he appreciated the little moments he had never experienced before. Just taking a moment to look at the stars, for example: »I saw satellites, shooting stars and the Milky Way. And the colours of the sky, from purple to red. I live in the city where I can barely see anything of the sky!« He also felt at home on board, despite the cramped quarters where strangers became friends. »There is something about sailing that brings people together. You learn to live together, to have confidence and to work a lot. After a while the ship becomes your home and you have to take care of her, otherwise she will sink!« Would he like to sail again? Ideally, he would like to never even leave. »I’ve learned so much more in the past three weeks than in the six months before that,« he says enthusiastically. And adds: »This is an experience that also makes you humble!«

Text: Detlef Jens. This article appeared in GOOSE No. 30 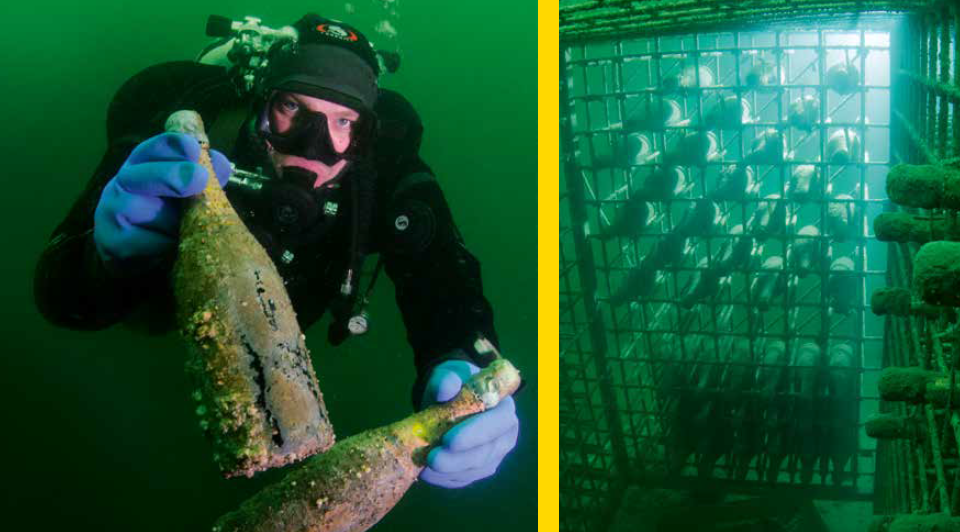